Arturo Almandoz was presented the fourth volume of "the city in Venezuela" by Marte. 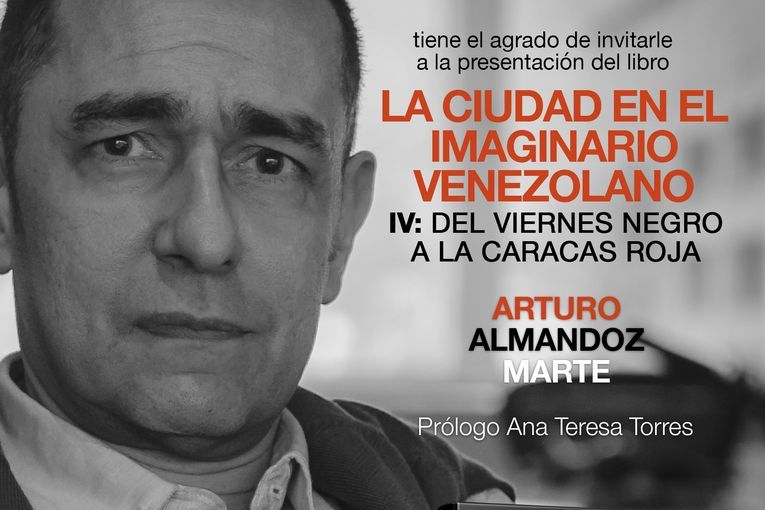 Black Friday from Caracas to Red, the fourth volume City Dream in VenezuelaA comprehensive research study by Venezuelan Arturo Almandoz Marte will be presented by the critic and author Carlos Sandoval at the El Buscón book shop on Thursday, November 15th at 18:00 at the Paseo Las Mercedes Shopping Center in Caracas.

The author's author Ana Teresa Torres' suggestion is the last installment of the book, which has been carried out since 2002 by the city planner, researcher and chronicator Arturo Almandoz Marte with the support of the City Culture Foundation and Simón Bolívar University. The FCU reveals a literary dream about the city in the '80s and' 90s.

Following the procedure and regulation of the previous three books of this investigation –From the Mariscastaña to the consolidation of the red roofs (2002; 2009), From 1936 to minors (2004) and From 1958 to the parish metropolis (2009), this fourth chapter describes and describes the main moments of the article and imaginary imagination of Venezuelan authors in the last years of the last century.

An interesting journey shapes the reader into the exhaustion of Greater Venezuela and his transition from the '70s to the' 80s, the so-called Black Friday, the historical coordinates that make up the "disturbances of the capital", the disturbing dream of the first chapter. .

The human comedy, the first part of which illustrates the narrative, is completed with an article and history that records the irreversible imbalances of Venezuelan urbanization, in particular in relation to culture, civilization and imbalance. memory.

As in the previous books, the third part is dedicated to the Venezuelan urban dream, and on the one hand, it follows international travel and migration routes that include Miami, while on the other hand cities and districts in Venezuela.

The last chapters – "broken and violent" Urbes and "Red Caracas" – from 1989 Caracazo, Uslar Pietri, Liscano and the so-called "notables" made with the warnings mentioned about the relatives of the so-called political and economic, with the warnings that have already been broken down irrevocably disastrous consequences on cities.

Directed by Ana Teresa Torres and Antoinette Madrid, Eduardo Liendo and Carlos Noguera, the novels gave the definitive answers to the entire process by reconstructing the city's memory with the urbanization of families passing through the fifth chapter.

Malena, in addition to the voices of other women, the case of Torres. Exile of time (1990), in front of Maricastaña de Picón Salas, which opens the first book of this research, resonates as a final swan song. And as an end to the interrupted national modernization, but also as an advance of political and social changes to devastate the country in the XXI century, the final chapter in this fourth book also reveals the red and revolutionary Venezuela.

"Interpreters, novelists, storytellers, and cousins ​​name horses between the pages of the masterpiece of the Venezuelan script of the last third of the twentieth century," he writes, "Ana Teresda Torres". Speaking from the city and also from the city – the police, it can be said – speaks from them. A literary critic who revitalizes Venezuelan literature is not an expert in cities defining Caracas, nor is it a historian who tells us chapters of our history or a sociologist who studies Venezuela. It is a truly interwoven business. "

Arturo Almandoz Marte (Caracas, 1960) is an urban, university professor, essayist and chronicizer. He was senior associate professor of USB and associate professor of Pontificia Universidad Católica de Chile, as well as being a guest at other universities in Latin America and Europe. She is the author or editor of more than twenty books which have won awards in different fields of research and national and international research, as well as articles in the journal, collective works and encyclopedias, USB and Municipal de Literatura (1998, 2004).

Letralia, Land of LettersThe magazine of Spanish-speaking authors since 1996. To send information about literature and culture in general, please write to [email protected]

Latest texts from Letralia (see all)

National Academy of Medicine: We don’t know how many Covax vaccines will reach Venezuela

What is dyslexia?, the condition of Mexican actor Sammy Pérez | Health | magazine

Venezuela participates fully in Petrocedeño company, which operates in one of the world’s largest oil fields