England: Euro 2020 – the team we predicted five years ago 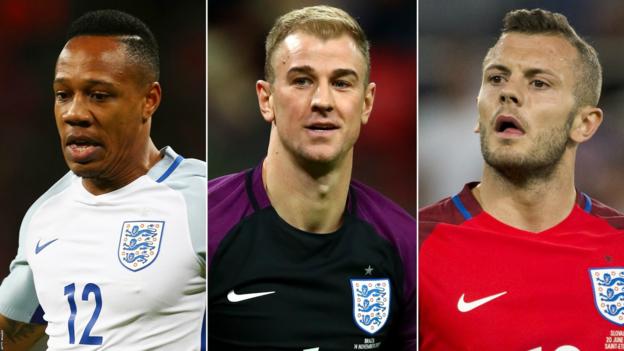 Over the past few days, I was reminded of the BBC Sport tweet five years ago …

Both of us seem to have eyes for a look with Harry Kane and Raheem Sterling.

But then we've fought in a number of positions – even though injuries have played their role in justice.

So how did we do it?

In contrast, how can you go wrong by choosing Premier League's 2014-15 Gold Glove winner Joe Hart?

But sight is great, isn't it? Nowadays, 32-year-old Hart is struggling to pick up a game at Burnley, where current British team member Nick Pope is number two.

At least we were a little closer with John Stones, who was a little bit better, Eric Dier played in the World Cup in Russia in 2018, but he was able to make Gareth Southgate's team in June, even though he was in the third league. has not thought since. Play-off against Switzerland in June.

Okay, we were a million miles away with Nathaniel Clyne, who hadn't played for Three Lions for three years, and Luke Shaw was injured from injury, which put us in the midfield.

Fit and shoot, Jack Wilshere looked at the real deal. He is still 27 years old, but unfortunately this talented midfielder has more injuries than the upper limits these days.

Jordan Henderson was one of our inspired choices, and the Liverpool midfielder made a good choice for next summer's tournament.

The same cannot be said for Nathan Redmond. Talk about the old tweets that came back to bother you!

How did you get in?

But we were not alone in seeing mixed results for our estimates.

Looking at your suggestions, there was some questionable talk about who else might be in the UK's Euro 2020 team.

Admittedly, there were a few commendable efforts:

Adam Smith: Isn't it too much to call Dele Alli?

Contact: I think Ruben Loftus-Cheek and Dominic Solanke will be there.

Kwadwo Boadu: I think Alex Oxlade-Chamberlain would be more than Nathan Redmond, and I wouldn't be surprised if Jon Flanagan was more surprised than Luke Shaw.

And then, of course, the less successful ones were:

Macauley Mills: What about Jon Flanagan and James Ward-Prowse? Also, if Jordon Ibe continues to play on how to be there. I'd rather her than Sterling now.

Garath Thorn: Luke Shaw? Nonsense. Luke Garbutt is on the next left after Leighton Baines.

Nye Crozier: No room for Saido Berahino or Danny Ings? I personally would have been interested in seeing Kane as a good strike partner.

Paul Robinson: How about Brooklyn Beckham?

Anyway, I'm at risk of making the same mistakes over and over again – let's try it again. Using the selector below, estimate that UK's XI starts for Euro 2024.