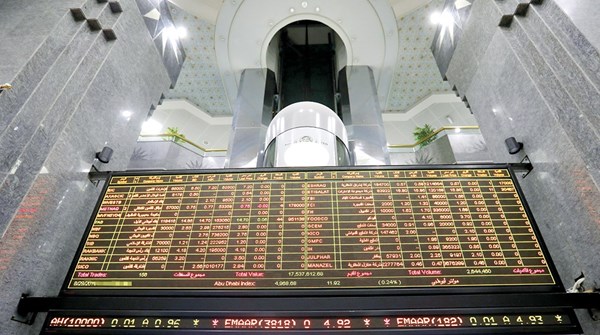 UAE financial markets continued to harmonize on the first day of transactions on the first day of the week, amidst the high liquidity flow with the value of transactions exceeding 1.16 billion dirhams in today’s session. Daily monitoring of the transactions showed that the general indicators of the markets are still at levels sufficient to break new resistance points in the next few days. The Abu Dhabi Securities Market general index rose 0.25% to close at 6117 points, while the Dubai Finance Market headline index closed at 2627 points, up 0.05% compared to last Thursday’s session.
While the list of winners in the Dubai Financial Market includes Damac’s share of 1.21 dirhams, Deyaar Development increased to 27 films and its market share was determined as 1.09 dirhams. The shares of First Abu Dhabi Bank on the Abu Dhabi Stock Exchange increased to 14.50 dirhams, and the value of transactions on the stock reached 272 million dirhams. The share of ADNOC Distribution rose to 4.58 dirhams, while the share of International Holding Company closed from 91 dirhams and Aldar Properties’s share was closed at 3.62 dirhams. It should not be forgotten that the majority of commercial liquidity in the markets is concentrated in the capital market with transactions amounting to 1.087 billion dirhams.