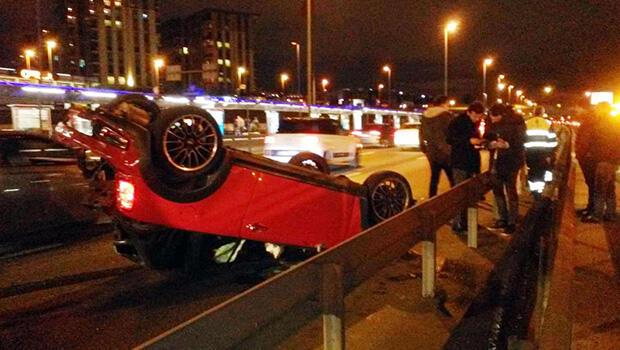 The accident occurred at 23.15 at E-5 highway Cevizlibağ. According to information received, Kadir Can Ö. 34 HL 9359 car parked in the direction of Ankara, out of control while cruising in the direction of social media phenomenon Semih Varol 34 NC 2988 plate under the car hit the vehicle and rolled.

The driver of the car that hit the barriers Kadir Can Ö. While trapped in the vehicle, Semih Varol survived the accident without injury. Citizens of the accident, health, fire and police teams reported the situation. Kadir Can Ö., Which was taken out from the place where the firefighters came from the scene, was taken to the hospital with an ambulance.

HE DID AN EXPLANATION

Police teams took the security measures to get the traffic flow through 2 lanes provided. Due to the accident, the intensity of the traffic returned to normal after the work of the teams.

Semih Varol, a social media phenomenon who survived the accident without being injured, said, kilometre I was driving 80 kilometers in the middle lane, and my car shook in an incredible voice. This car ran over my car and rolled over. He locked all the traffic in Istanbul. There's nothing wrong with my friend, so we had a belt. It was a great accident. Çok