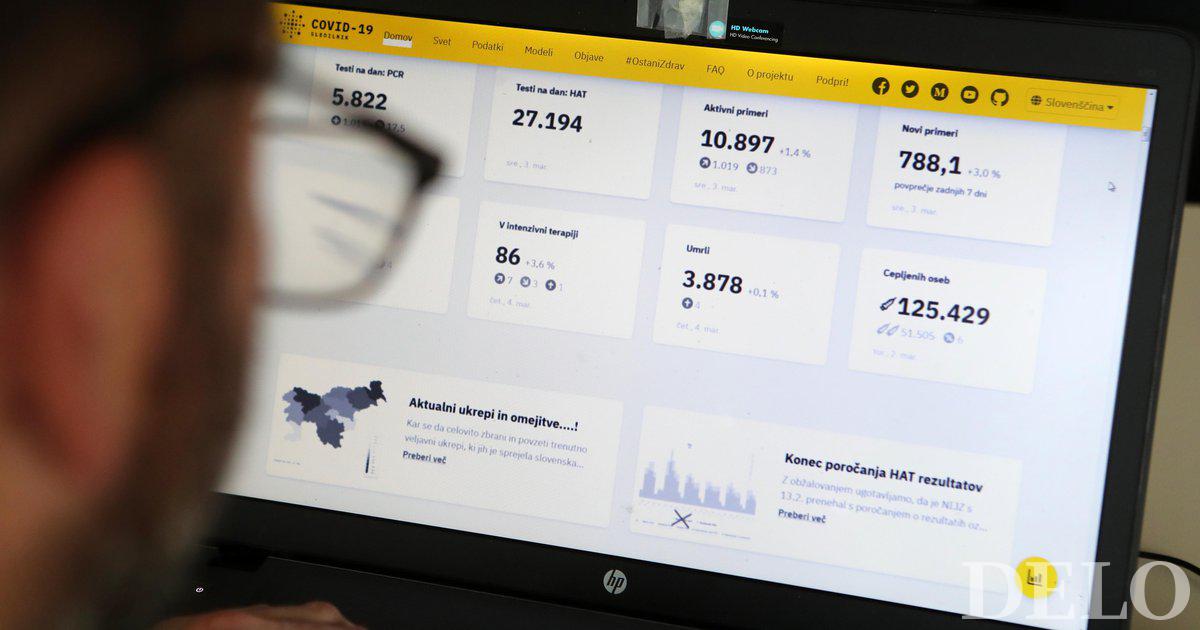 On the anniversary of the first confirmed case of a new coronavirus infection in Slovenia, the volunteer project Covid-19 Sledilnik team warns that they still cannot access all epidemiological data, even if they are collected. Therefore, they wrote that the data on the tracker page for covid-19 is not available today. The portal announced today that “in collaboration with public health agencies, they want and expect to be able to establish an open relationship that will make up for the shortcomings of public data systems and benefit all and improve data applications. in subsequent epidemics and crises ”.

The monitoring team tells you what data they want to have and in what format it is constantly alerting. He emphasized that although they have made progress from the beginning and worked very well with the Ministry of Education, some stakeholders such as the National Institute of Biology, NIJZ and the Ministry of Health, which published data on the virus in wastewater, deserved praise. they didn’t feel right. They understand that organizations and public administration do not have the capacity and human resources to analyze and model data. “This is one of the reasons we exist. The professional public has the potential to provide this information to the public, which they told about what these institutions could not do. For them, open data is far more valuable than a single institution having the capacity to analyze them.

They stressed that as a community, they want and need publicly published data to better understand the outbreak, otherwise they would require minimal additional action. “These data are already anonymized, and realizing its usefulness doesn’t require much imagination. So we can help as best we can.” are data that they know to be, but are not provided in “machine-readable form.”

They warn that “although we see them, we are blind without good data.” Therefore, they wrote that the data on the tracker page for covid-19 is not available today. In practice, this means that their data appears on the portal and we can understand the test results from them, but we cannot choose between views and period. In the past year, they believe that public, transparent, open and visualized data in crises played a key role in shaping public health measures and limiting the spread of the virus.

An important fact that should not be overlooked is that the follow-up team does everything on a voluntary basis and wants to draw attention to the importance of the data they collect and analyze on their anniversary in one place to bring them to the public. They said that they were motivated by the support of the public, but that the progress they wanted in collaboration with public institutions was not.

Alerts for individual test monitoring as early as December

The National Institute of Public Health (NIJZ) stopped reporting the number of positive rapid tests on February 13. In late December, with the introduction of the batch screening rapid test, the covid-19 follower team warned that the results of the rapid and PCR tests should be monitored separately, as the tests provided different information. Most of the positives in the autumn PCR tests meant increased spread of infections and predicted that we were approaching the upper limit of performance in laboratories. However, it was clear from the rapid tests how the presence of infections varies among asymptomatic individuals. Since an “unusually high number of false positive tests” were reported from the field, epidemiologists recommended that all positive tests be checked with rapid PCR tests. At that time, the results of the rapid tests also “disappeared” from the statistics.

For COVID-19, the audience warned that changes in “testing regimes” at that time made it difficult to interpret the data. They believe there are excellent data on the rate of infection in the asymptomatic population, but they are no longer publicly available. As data on the reasons for referrals for testing are also lacking, the NIJZ and Ministry of Health called for “at least partially preserving the integrity of both time series data”: municipality, age and gender.

City to victory, but still in game after goal at Borussia Etihad

Five people died on Friday, with more than a quarter of positive tests #video

Keith Haring also played with his famous street chess in the Hall of Fame Chess Players.

Why can Lesnina be open and not Ikea?