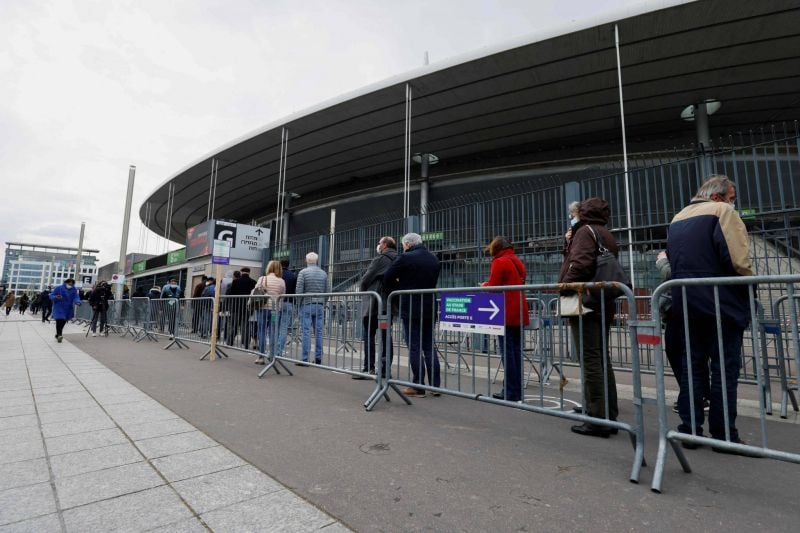 While Europeans question the link between the AstraZeneca vaccine and some rare types of thrombosis, the United States will offer anti-Covid vaccine to all American adults starting April 19.

The United States, the absolute most grieving country in the world with over 550,000 deaths, has given a huge boost to the vaccination campaign and has been giving an average of more than three million injections a day in the past 7 days, according to officials.

Meanwhile, vaccination campaigns are trying to gain momentum in the European Union, where none of the 27 countries have achieved the goal of vaccinating 80% of people over the age of 80, according to the Commission.

But the EU executive said yesterday that the acceleration of deliveries in the second quarter would allow the EU to gain “collective immunity” this summer.

On Tuesday, the European Medicines Agency’s (EMA) safety committee announced that the Swedish-British lab AstraZeneca has yet to come to a conclusion about the link between the vaccine and certain thromboses, against the testimony of several of its executives hours ago. “The review is currently under way,” the European regulator said, saying an announcement is expected on Wednesday or Thursday.

In the Italian press, Marco Cavaleri, responsible for the vaccination strategy at the EMA, said on the contrary: “Now we can say, it is clear that it has a connection with the vaccine. However, we do not yet know what caused this reaction. “

An official from the World Health Organization assured yesterday that the risk / benefit balance continues to weigh “heavily” in favor of the use of the AstraZeneca vaccine.

Suspicions of possible serious side effects arose for several weeks after atypical cases of thrombosis were observed in persons vaccinated with AstraZeneca, but rarely.

Dozens of cases have been identified, many of which have died. Out of a total of 18.1 million doses administered in the UK as of 24 March, 30 cases and 7 deaths occurred.

Until now, the EMA argues that although “possible” “no causal link to the vaccine has been proven” and that the benefits of vaccination against the coronavirus still outweigh the risks.

As a precaution, some countries such as France, Germany and Canada have now decided not to administer this vaccine below a certain age. Norway and Denmark suspended its use. AstraZeneca assured in March that there was no “evidence of aggravated risk”.

This vaccine is one of four vaccines approved by the European Union, along with Moderna, Pfizer / BioNTech and Johnson & Johnson, whose deliveries are expected on April 19.

According to a senior government official, the United States is expected to announce that all adults will be eligible for the vaccine from ten days ahead to April 19, according to the previous target. The country also assured Monday that it wants to do “a lot more” without asking “goodness” in distributing the vaccines to foreign countries.

In France, where the third wave is in full swing, a giant vaccination center was opened on Monday in the Stade de France, the composition of the world champion football team in the suburbs of Paris. Following the indulgence on the Easter weekend, the whole country entered a total restriction regime with a curfew and reduced travel scheduled for four weeks.

Other countries have announced new restrictions: In India, where a record number of cases have been recorded, New Delhi will impose a nightly curfew for its 25 million residents as of Tuesday.

A seven-day lockdown in Bangladesh sparked violent protests in which police opened fire, killed one and injured at least seven.

The situation is also deteriorating in Georgia, where the Prime Minister tested positive on Tuesday, which recorded three times the average number of cases recorded daily in recent months.

No Olympics in Tokyo for North Korea

North Korea has announced that it will not participate in the Tokyo Olympics this summer to “protect” its athletes from any risks associated with the pandemic.

Conversely, the horizon is clear enough for New Zealand to approve a “bubble” principle on Tuesday that citizens of the two countries with Australia can travel without quarantine, and it hopes that this will happen in mid-April.

In Europe, the regional state of Saarland, surrounding France and Luxembourg, partially lifts its anti-Kovid restrictions, reopening cafes and restaurants in particular, such as Portugal and Greece the day before.

In Denmark, hairdressing and beauty salons are reopening for holders of vaccine “passports”.

A similar health passport is being considered by the UK government for mass gatherings such as football matches and indoor events, and the Prime Minister confirmed the reopening of unnecessary shops on April 12.

The United States will offer anti-Covid vaccines to all American adults starting April 19, while Europeans will question the link between the AstraZeneca vaccine and some rare types of thrombosis. The conditions of the epidemic with more than 550,000 dead …