Home / saudi / After removing the turban he left the abay .. Emirati artist Mashaal al-Shehhi after flying the white dress led to wide controversy!

UAE artist Mashaal Al Shehhi has sparked controversy on social networking sites after posting a photo on his account with "Instagram", which triggered a wide wave of anger.

Mashaal al-Shehhi appeared with her husband, Ahmed Khamis, as he held his hand by adding tight black trousers and sneakers while turning the white dress he was wearing instead of abaya.

Mashaal al-Shehhi also adopted a new hairstyle in which the image gained more than 16,000 likes and wrote its interpretation: "Touching your hand is like having a world." 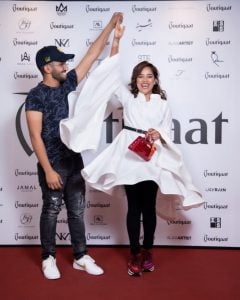 This follows the controversy that has recently arisen several times without the headscarf. He then clarified and stated that he was not covered in several videos.

Mashaal al-Shehhi, a small and weird way to review his new car, and more than 234 thousand can watch the video after publishing the same account previously fired sites. "What do you think of my new car?"