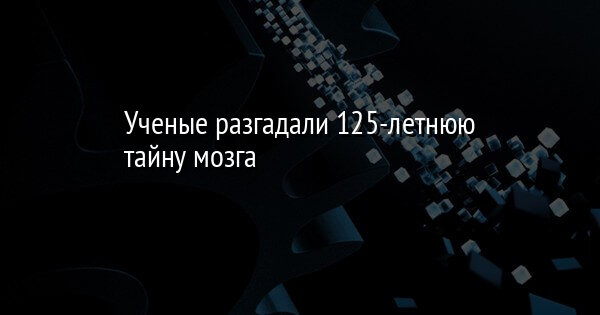 Since 1893, scientists have known the mysterious structures called perineuronal networks wrapped around neurons, but the function of these networks is unknown.

However, a group of scientists at the University of Virginia, led by Harald Sontheimer (Harald Sontheimer), determined that these networks modulated the electrical impulses in the brain. Furthermore, they found that seizures could occur if the nets were resolved. Results of the study published in Nature Communications.

First, the researchers did this discovery in mice suffering from epilepsy caused by glioblastoma, a deadly brain cancer; first symptoms often convulsions. Glioblastoma is the only cancer that is limited in space. Because the skull prevents the cancer from expanding outward, the tumor produces an extra excitatory chemical neurotransmitter (glutamate) which kills adjacent healthy cells to make room for growth.

In addition to glutamate, the tumor secretes an enzyme that aims to destroy the surrounding extracellular matrix – a gel-like substance that holds brain cells in place. Glioblastomas are very malignant and are known to spread in the body. The secreted enzyme is a type of knife that allows the cancer cells to move and release.

Italian neuroscientist Camillo Golgi (Camillo Golgi) first discovered the perineuronal network in 1893, but later misunderstood their functions. Golgi called the network "corset" and said that they probably blocked the exchange of messages between neurons. Sontheimer's work rejects it. On the contrary, the scientist saw networks supporting messaging. Neurons coated with perineuronal networks have a smaller membrane capacity and the ability to store electrical charge, which means they can trigger a pulse and can be recharged twice as fast as non-neural neurons.

When they suddenly lose their perineural networks, the results can be disastrous: by applying this enzyme to the brain without a tumor, scientists have found that the most enzymatic degradation of perineuronal networks is sufficient for seizures, even if the neurons remain intact.

The attention of the researchers now focuses on the role that perineural networks can play in other acquired epilepsy due to, for example, head trauma or brain infection – which will bring them closer to creating an effective drug.

Ük We have solved the secret of 125 years of neurology! Basic science is to protect an open and observant mind and answer old and new questions, ve says Sontheimer.

According to the World Health Organization, more than 50 million people worldwide suffer from epilepsy; one third of them are not sensitive to known anti-epileptic procedures.