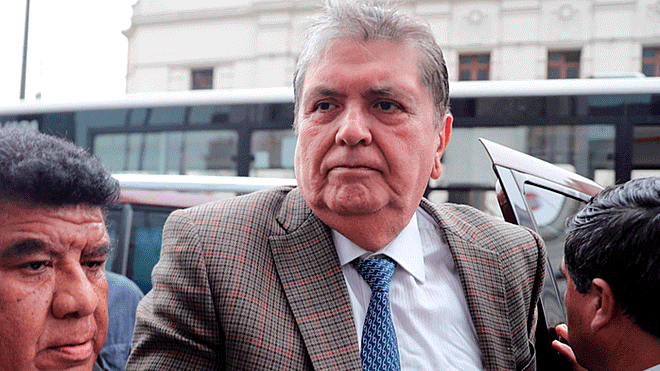 15:17 Estudio Espinola was the mediator between Odebrecht and Alan García to pay for the conference.

15:10 Prosecutor José Domingo Pérez explains how he prepared his $ 100,000 payment plan in the Structured Operations Division (Caja 2) of Odebrecht.

15:04 Prosecutor José Domingo Pérez started to support the obstacle to leaving the country.

15:03 Judge Juan Carlos Sanchez Balbuena came to the courtroom and took the floor to start the disability hearing to leave the country.

15:01 Alan García won't be present at the trial. His presence was not mandatory.

14:48 Prosecutor José Domingo Pérez is on trial to start his plea.

14:35 Judgment, 3: 00'e informed. Alan will start with the audience who will decide whether García can leave the country.

#enbrev to | The Second National Preparatory Court of the Anti-Corruption System begins to hear the barriers to leaving the country to Alan García for money laundering and aggravated collisions. 3 in the morning. Carlos Zavala Building the pic.twitter.com/n6zmr3tyi

Lava Jato. Judge Juan Carlos Sánchez Balbuena's Second Anti-Corruption Investigation Court, which is in charge of the National Anti-Corruption System, evaluates this Saturday at 3:00 on Saturday. disability to leave the country Against Alan García Pérez.

The request was made by the provincial prosecutor. José Domingo PérezLava Jato is responsible for the investigation of the case. In this context, he is investigating former President Alan García for alleged crimes of money laundering and aggravated crime.

The obstacle to leaving the country to Alan García is given by the fact that IDL-Reporters received money from Caja 2 of the former president, Odebrecht, to submit a report to be approved as part of a conference that simulates the payment of a conference. Join the Lima Metro Line 1 project. In addition, the prosecutor Domingo Pérez The investigation into Alan García was extended by 8 months.

APRA leader on Thursday from Spain to Lima, Spain prosecution He was expected to respond to the signed Emergency Decree benefiting from Odebrecht. However, the effort was suspended.

The former president defended himself from the statements of the Odebrecht witness. Alan García said the money came from Box 2 and he did not know that the money was received in return for a conference in Sao Paulo. However, when the world's most important businessmen spent $ 65,000 per conference, it was questioned that the payment was $ 100,000.