Home / malaysia / BOSSku Tanjong comes to Piai to campaign for himself, not for the public 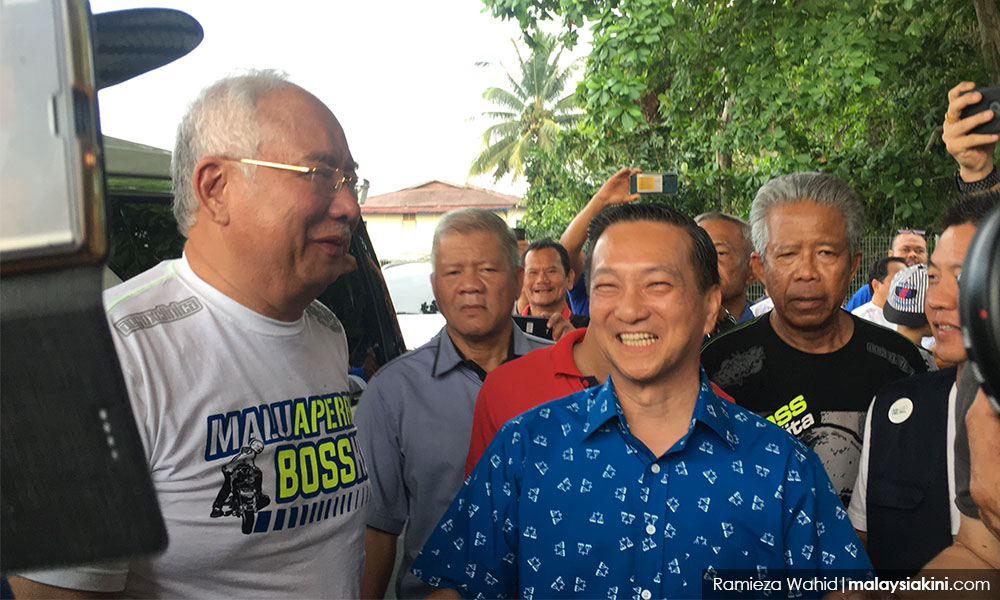 MP SPEECH | Tanjong Piai had a special guest today, not to campaign for the people of Tanjong Piai, but on his agenda – 1MDB scandal BOSSku who came without feet to defend his innocence and hope to become Prime Minister again

On Monday (November 11th), it will be an important date for BOSSku and Malaysia, because the Supreme Court of Kuala Lumpur will decide whether to move freely, and will be asked to enter the plea on seven charges of abuse, power, corruption and money laundering from SRC International.

Already many Malaysians are very upset about why the former Prime Minister is still not in prison and is free to move around the country, and Pakatan Harapan's freedom to pledge to rebuild our country in the last general election and fulfill its Malaysia hopes. we have made five promises, one of which will make “institutional and political reforms”.

This means the restoration of the principles of the rule of law and of an independent judiciary.

If we imprison the former Prime Minister without obeying the important principles of the rule of law and an independent judiciary, we will violate our Pakatan Harapan election commitments and be no different from the previous Barisan National Government brought to Malaysia. The deception, ignorance and intimacy of the international community as a global kleptocracy.

We do not want to return to Malaysia's infamous, ignorant and injustice as a global kleptocracy – a bandit and kleptocratic state!

Hosted by the 1MDB scandal and other widespread corruption in institutions such as Felda, Felcra, Tabung Haji and MARA, Kleptocracy is something that all Malaysians rebel against regardless of race or religion in the 14th General Elections. May 9, 2018.

The most shocking and most alarming is that there are former Barisan Nasser Ministers, MPs and leaders still defending BOSS in the 1MDB scandal.

Even though bankers and financial officials outside Malaysia have been convicted, even though they claim that the 1MDB scandal has not been proven in parliament and abroad, they are imprisoned for corruption, criminal complaint and money laundering in connection with the 1MDB scandal.

The most prominent 1MDB development in a foreign country, the 1MDB scandal brain Jho Low's $ 1 billion consensusabove), Together with the US Department of Justice in the case of the 1MDB-related assets lost in the United States and the United Kingdom.

At first, in the first few months after the historic “509” general elections, Barisan Nasional leaders tried to avoid the BOSSku and 1MDB scandal.

Therefore, in the election held by the Balakong State Assembly in Selangor in August last year in Selangor, where the MCA was a candidate, BOSSku vowed to stay away from the Barisan Nasional campaign.

However, Tanjong Piai is the happiest person in the parliamentary election BOSSku visit today, MCA candidate Wong Jeck SengunderAnd who cannot hide the excitement and joy of BOSSku with his support for his candidacy).

Wee Jeck Seng's support for the BOSSku today, the approval of the 1MDB scandal and the approval of Malaysia's desperation and injustice, with Malaysia being recognized as a world kleptocracy under the previous regime.

The question is whether Tanjong Piai voters can imitate Wee Jeck Seng to confirm his role in the BOSSku and 1MDB scandal, and whether to reclaim his historic or even miraculous decision to make a clean break from Malaysia on May 9, 2018. the question is. The history of a global kleptocracy to become a leading nation of integrity in the world.

On May 9, 2018, I shudder to think about what would happen to Malaysia if there was no historic decision to end the Malaysian keptocratic government.

I shiver further to think about the future of our children and our children, if after 18 months “509 Malezya, we allow Malaysia to become the world's leading country of honesty through our difficult path. The kleptocracy!

LIM KIT SIANG is the deputy of Iskandar Puteri. The above is a conversation in Pakatan
Harapan ceramah in Pekan Nenas on 9 November 2019.

The views expressed herein are those of the author (s) and do not represent the views of Malaysiakini.