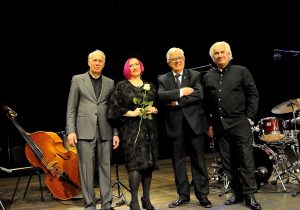 Celebrating the 85th birthday of Raimonds Pauls, a concert was held on Saturday at Vidzeme Concert Hall “Cēsis” where the audience could listen to the premiere of Maestro’s latest jazz compositions.

Cēsis Concert Hall Marketing and Communications Manager Egija Saļņikova says that 280 tickets were purchased for the online concert, but until midnight January 19, the concert can be watched by purchasing a ticket or an access code for the concert registration in Biļešu paradīze.

E. Salnikova explains that this concert was planned last year: “The 2021 program, including this concert, was prepared in November and presented to the State Capital of Culture Fund and we received approval in December. Considering the current conditions, we did not cancel the concert schedule, but we decided to broadcast it online. Of course we can say that everything is an anniversary year anyway, and we could postpone the concert to the second half of the year, when it could possibly be done with the audience, but if there was an opportunity to air the concert directly during the anniversary Week, we couldn’t miss the opportunity.

The concert hall wanted to congratulate Maestro on its anniversary with a concert, we hope that the free spirit of jazz, the high skill of the musicians and the energy of interaction will reach the audience in the most direct way and give the closest possible sense of presence. so longing for now. “

If the public seems to know best the songs written by Maestro and become an integral part of daily music, then R. Paul has always been close to jazz music, new compositions in this genre have been created and recorded in the album “Walk”. He was also heard in Riga “and Cēsis concert.

Maestro continues to create new music with its inexhaustible energy and ideas. During the epidemic, a concert program dedicated to Riga was created with compositions such as “Old Town”, “Bastejkalns”, “Riga Cathedral”, “Vermannis”, “Livu Square”. and other devotions to certain places and for Riga itself.
Along with Maestro, two legendary musicians were on stage at the Cēsis Concert Hall: Estonian double bassist Toivo Unts and Latvian percussionist Māris Briežkalns.

T. Unts pointed out that Raimonds Pauls’ expression in jazz can be compared to the work of Oscar Peterson or Erols Garner: “We should not seek a deep jazz philosophy in this music, but simply surrender to melodies and emotions. . Also, Maestro’s handwriting has a unique melody that is also reflected in instrumental music. “

Sofija Rubina, Estonian jazz singer, known outside her country as a talented and creative artist, – Avcı, joined jazz masters at a concert in Cēsis. She sang the music by Raimonds Pauls and award-winning American lyrics by Gordon Pogoda in English. It will be presented to the public for the first time, as are instrumental compositions that were made very recently and dedicated to Riga.

In the concert hall “C concertsis” quality music is back for an evening, now the house is in darkness and is silent again. E. Saļņikova explains that it didn’t take too long, because another surprise was prepared for the audience at the beginning of February and is still online: “There are occasional resident artists in the Cēsis Concert Hall. Last year, this year was Andrei Osokin – the trio Balanas. Brothers Kristīne and Margarita have already given concerts in Cēsis, now sister Roberts has joined them. Throughout the year, three young artists will create programs for the Cēsis Concert Hall. The first concert was scheduled on February 6, he did not want to cancel it, the audience will be able to watch “Three Balanas and Sinfonietta Riga” online from the grand hall of the concert hall. At least a small musical connection is established with the concert hall. “

Researchers in New York discover a new strain of COVID-19

Covid-19 was diagnosed. How tired will I feel? What about organ system recovery? – TVNET

5 parking assistants to assist with parking