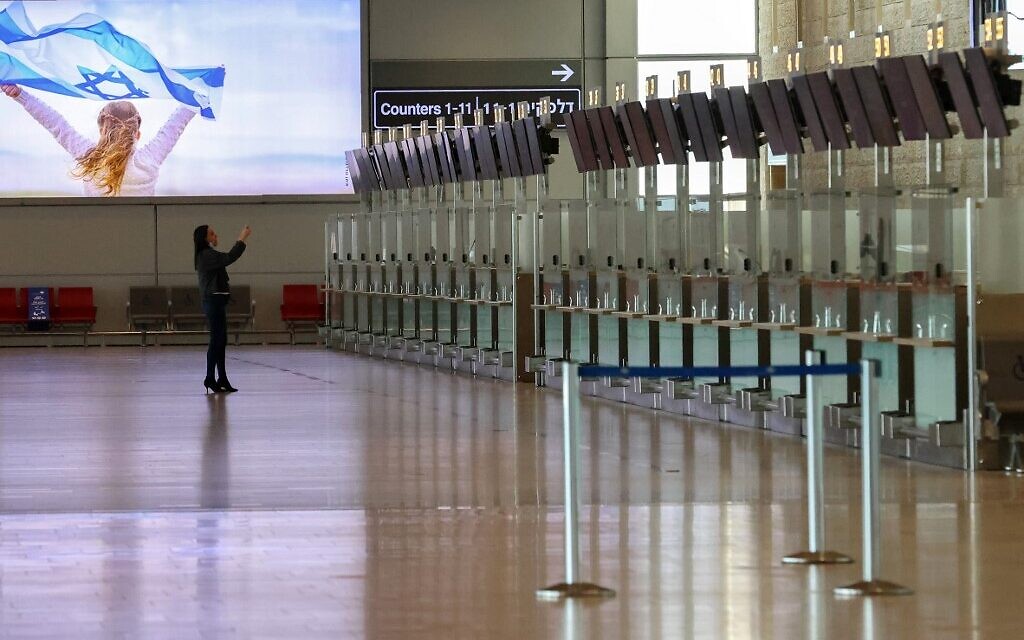 On Monday night, Israel closed Ben Gurion Airport to nearly all flights by the end of January amid fears of fast-spreading or vaccine-resistant coronavirus variants entering the country.

The closure of the airport began at midnight and will remain in effect until Sunday, January 31, when national lockdown measures will be eased, unless the government takes action to expand the rules further.

For the first time since the outbreak began, Israel blocked its own citizens from entering the country.

Even new immigrants who continue to arrive during the outbreak, despite non-citizen entry restrictions, will have to wait until the closure ends to travel to the country.

An ultra-Orthodox Jewish man walks past the check-in desk of Israel’s flag carrier Al-Al at Ben-Gurion International Airport in Lod, near Tel Aviv, on January 25, 2021, before boarding one of Israel’s last flights. (Emmanuel DUNAND / AFP)

Under government order, all commercial aircraft are prohibited from entering Israeli skies or landing at Ben Gurion Airport. Exceptions will be made for cargo planes, emergency aircraft and aircraft crossing Israeli airspace without landing.

Departure flights will also be canceled, and only those traveling for medical treatment, essential jobs, legal proceedings, the funeral of a relative, and moving from one residence to another, even then, will only be allowed to travel by private aircraft.

The director of the Ministry of Health may grant exceptions for humanitarian or “private personal” reasons.

International travelers have been identified as the main source of infection in the country.

We seal the country hermetically. “We will vaccinate another million Israelis just this week when we cover the skies.”

Netanyahu claimed that “no country” took such a step in the following months, when the government was criticized for being too lax in entry policy and most of the imported COVID-19 cases were blamed.

Sharon Alroy-Preis, head of public health at the Ministry of Health, told the Knesset on Monday that the planned closure of Ben Gurion Airport for a week would not be long enough.

“The six days we decide to close Ben Gurion Airport will not be enough. “We will have to extend the closing period by at least a few weeks to give time to the vaccination campaign,” said Alroy-Preis.

A British variant of the virus circulates widely in Israel, accounting for almost half of recent cases, according to health officials. Twenty-seven cases of South African strains were found in the country, in addition to four cases of the California mutation. Authorities fear that the variants might be resistant to vaccines.

The British government, widely believed to be much more contagious, said there are preliminary indications that its strain could cause a 30 percent higher mortality rate.

The closure of the airport comes with Israel’s daily virus load continuing to be high, far ahead of the rest of the world – despite 2.6 million Israel receiving the first vaccine and 1.1 million receiving both doses. The government aimed to vaccinate all adult populations over the age of 16 by the end of March.

Strict isolation, the third in the country, has been in place since earlier this month to reduce spiral infections. In accordance with the current lockdown orders, all non-essential enterprises and the entire education system, except for private educational institutions, were closed. Health officials are expected to demand an extension of the isolation for another week, according to reports Monday night.

Israel has seen more than 600,000 virus cases since the outbreak began in March and 4,478 deaths, including over 1,000 deaths in January.

JTA contributed to this report.

You are serious. We appreciate it!

That’s why we come to work every day – to provide discerning readers like you with the must-read news of Israel and the Jewish world.

Now we have a request. Unlike other news sources, we haven’t set up a paywall. However, because our journalism is costly, we invite readers, for whom The Times of Israel has become important, to participate and support our work. Israel Community Times.

For as little as $ 6 a month, you can help support our quality journalism while enjoying The Times of Israel. ADVERTISINGas well as access to exclusive content available only to Times of Israel Community members.