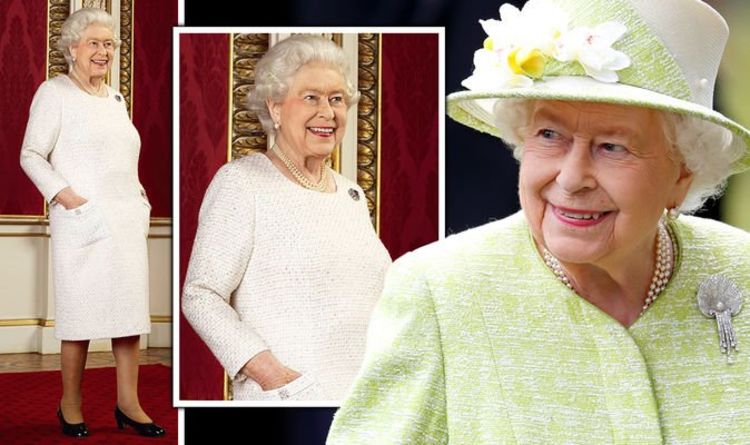 The Queen is all smiles in her dressmaker’s book. In the snap, the monarch dons dressed in a cream tweed dress enriched with gemstones on the pockets and a gold and red brooch. The stylish Queen completed her outfit with her signature pearl earrings and necklace.

The Queen’s face is perfectly framed by the use of light makeup on the eyes and cheeks and bold red lipstick.

But what stunned royal fans, who were pleasantly surprised by the picture, was the relaxed pose of the monarch.

In the picture, the Queen stands with her hands in the dress ockets pockets, looking ahead with a broad smile.

The picture has been published in Hello! Angela Kelly, who has been the Queen's confidant and dressmaker for years.

As announced earlier this year, Ms Kelly was given a memoir to focus on her job at Buckingham Palace, opening up a few secrets.

The Queen, every dressmaker wrote, relies on Ms Kelly.

READ MORE: The incredible royal residences – and how much they cost UK

Ms Kelly confessed in her book, The Other Side of the Coin: The Queen, the Dresser and the Wardrobe: ensure As they have been reported in a press, a flunky wears is always good to go.

“And yes, I am that flunky.

Queen The Queen has very little time to wear her own shoes, and as we share the same shoe. Makes

Ms Kelly also recalled the first meeting between the then-First Lady Michelle Obama and the monarch in 2009, during which the US President’s wife touched the Queen’s shoulder. =

Many commentators believed the Queen was upset by Mr Obama in the protocol, which wants to keep at least the tactile interaction between the Queen and her guests.

However, Ms Kelly set the record straight, saying the Queen can easily abandon protocol rules when she feels “respect for another great woman”.

The royal dressmaker wrote: Mich I've never been there before. Mich Michelle and Her Majesty. backs.

Reality In reality, it was a natural instinct for the Queen.

Maj When the Fondness is felt or the host of a State Visit, the Queen will always welcome you warmly.

“Anyone who is close to Her Majesty is not a threat and is certainly trusted.”

Ms Kelly was first appointed by the Queen of the Royal Victorian Order (MVO) and later promoted to Lieutenant of the same Order (LVO) in 2012.