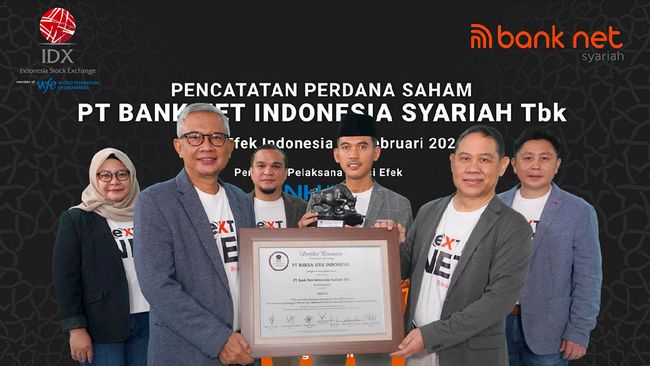 Last week, BANK shares ranked second with the highest earnings (15-19 February 2021), although the trading of stocks was suspended (temporarily suspended) on February 17 and 18.

Market capitalization reached IDR 18.15 trillion, up from IDR 14.82 trillion last Friday. With this strengthening, BANK’s shares rose 1.250% from the initial offer price (IPO) of Rp 103 / share, or almost a month.

Shares of Bank Net Syariah are controlled by PT NTI Global Indonesia and were listed for the first time or listed in IDX with IDR 103 / share starting price last Tuesday (2/2/2021) and received an IPO (initial IPO) 515 billion IDR.

Referring to Bank Net Syariah’s public offering introduction document, the company management stated that the company is currently in the phase of adapting to the retail segment through digital banking, where BANK focuses on developing its IT infrastructure and digital banking products.

Some of the supportive sentiments are the Islamic banking industry in Indonesia, which is experiencing fairly steady growth each year.

This is supported by several key factors such as Indonesia, the largest Muslim country in the world, the level of Indonesians who cannot be connected to banks is still high, and the market share of Islamic banking in the banking sector is still low, only 6.00% in 31 December 2019.

“There are only 14 Islamic commercial banks currently operating in Indonesia, which leaves the space too large for Islamic banking,” Bank Net management wrote in a statement on the business outlook for digital Islamic banks.

Then, the next feeling is the prospect of digital banking, digital technology will transform and transform the banking ecosystem in Indonesia.

According to McKinsey Research In 2019, the banking sector in Indonesia showed a tremendous trend of shifting traditional customer users to digital banking compared to the 2014 survey.

“Digital penetration has now reached 1.6 times compared to 2014 and reached 58% in line with the transformation in Asia’s emerging market countries,” the BANK management quoted McKinsey.