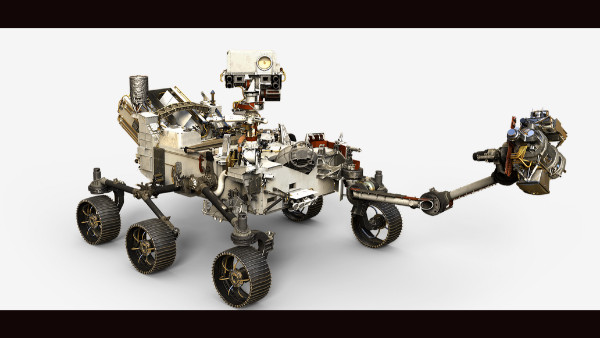 Mars 2020 rover is car-sized, about 10 feet long (not including the arm), 9 feet wide, and 7 feet tall (about 3 meters long, 2.7 meters wide, and 2.2 meters tall). But at 2,314 pounds (1,050 kilograms), it weighs less than a compact car. The Mars 2020 rover design is largely based on the engineering design for Mars rover Curiosity. This reliance on a proven system reduces mission costs and risks. The rover's long-range mobility system allows you to travel on the surface of Mars from a distance of 3 to 12 miles (5 to 20 kilometers). The rover has a new, more capable wheel design, among other improvements. For the first time, the rover carries a drill for coring samples from Martian rocks and soil. (Image and text courtesy – www.nasa.gov.in)

Planning for NASA's 2020 Mars rover envisions a basic structure that made the NASA rover Curiosity, which landed on Mars in 2012, but with new science instruments selected through competition for accomplishing different science objectives.

[NASA’s Moon mission: VIPER – the most advanced rover ever; What will it do, how will it look]

The Mars 2020 rover helps prepare for future human exploration of Mars with a technology for extracting oxygen from the Martian atmosphere, which is 96 percent carbon dioxide. This demonstration of new technology helps mission planners test ways of using Mars' natural resources to support human explorers and improve designs. (Image and text courtesy – www.nasa.gov.in)

The mission provides opportunities to gather knowledge and demonstrate technologies that address the challenges of future human expeditions to Mars. These include testing a method for producing oxygen from the Martian atmosphere, identifying other resources (such as subsurface water), improving landing techniques, and characterizing weather, dust, and other potential environmental conditions that could affect future astronauts living and working on Mars. (Image and text courtesy – www.nasa.gov.in)

NASA's Mars 2020 rover. The Red Planet as never before.

In this picture from Sept. 28, 2019, engineers and technicians working on the Mars 2020 at NASA's Jet Propulsion Laboratory in Pasadena, California, look at a rocket-powered descent stage away from the rover after a test. (Credits: NASA / JPL-Caltec).

The surface operations phase is the time when the rover conducts its scientific studies on Mars. After landing safely (Feb. 18, 2021), Mars 2020 has a primary mission span of at least one Martian year (687 Earth days). The Mars 2020 rover uses a depot caching strategy for its exploration of Mars.