Hoods Burns the flag and breaks everything 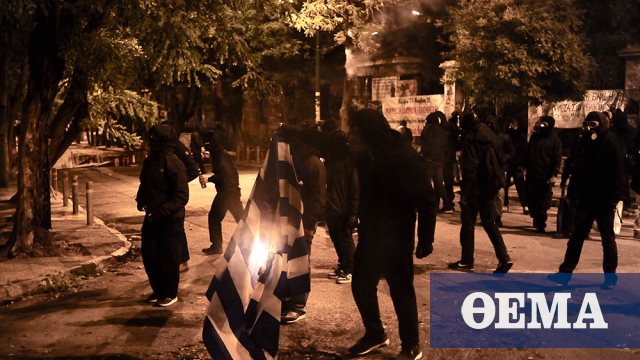 Explosive sections in Exarchia – Hoods were broken, burned and destroyed – Molotov rain – Chemicals and water spills to clean the police from the fire

Extensive sections continue in the Exarchia region: Shortly after the 45th anniversary of the Polytechnic rebellion, the first major outbreak was outside the GADA on Alexandras Street, where the protestors had led the police to burn stones and other objects. He was injured in the ambulance when he was 24 years old.
Less than eight in the evening, Exarchia turned into a battlefield with hoods covering everything with gas masks, burning the flag, breaking and destroying everything. At the same time, police forces are trying to limit young people working in Polytechnic, where Molotov is suffering.

At seven o'clock in the afternoon, in Exarchia, the base station, the anarchists, began building barricades in the historic building of Polytechnic, and soon after the first Molotovs on Stournari Street fell.
While the chapters were burning, the episode was extended to Patisia. When the Molotovs are raining, police forces use a wide range of chemicals.
Apart from GADA, eight suspects were admitted to join the departments.
Shortly before eight o'clock in the evening, they cut the Polytechnic Gate on a letterhead authority.
The police used a water drop truck, which flowed to Polytechnic from the Patrol. The anti-authoritarians targeted the vehicle and resulted in the efforts of MAT to make an effort to push the hoods.