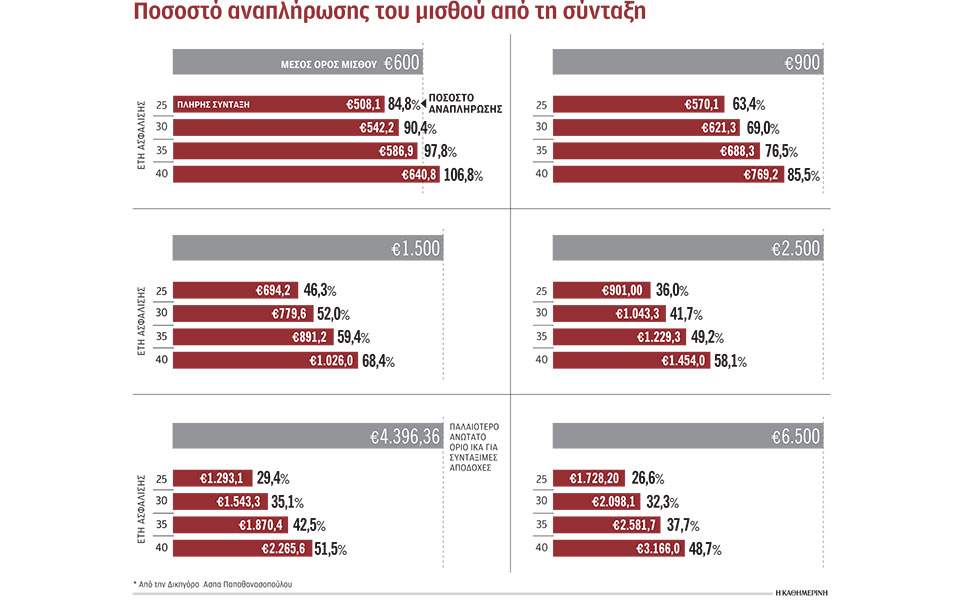 Perhaps the biggest challenge facing the country's current social security system is the leadership of the Department of Labor, three years after the implementation of the Katrugalou law, proving that high contributions with taxation lead to non-wage costs. a very high level of insurable earnings and low pensions lead to a distorted and socially unfair system.

The recent decisions of the Council of State pave the way for both the level of contributions to self-employed and the change in substitution rates on the basis of which the new pensions are calculated. Experts sound the alarm, the answer is "who pays the pension of others," they point out. They pointed out that the solution was to strike a golden balance between the necessary actuarial justice, the necessary social solidarity and the compulsory applicability of the system.

As evidenced by a series of studies, for example, in 2011, only two-thirds of pensions were "met" by paid contributions, and the rest of the budget continued to injustice in 2019, but the model reversed. Therefore, contributions do not only cover pensions, but are also used to cover system deficits due to "exceeding /10 by 1/10. In practice, we have gone through a system where pensions are over-funded by society, through taxation, not only for those who approach the poverty line, but even for the majority of groups such as civil servants. Where pensions are now funded. So, the contributions are much higher than the pension …

It also appears, for example, that a participant with a low wage for 15 years guarantees a pension equal to 77% of his pension if he completes double (30) years of insurance. As a result, the employee has poor financial incentives to remain insured after the age of 15 if he can alternatively work informally and increase his disposable income over the working life. In addition, an insured person with insurance for less than 15 years is not paid a national pension. Therefore, the current structure of the national pension is thought to promote tax evasion, but it is clearly not encouraged to work officially for a long-term resident in Greece for less than fifteen years (eg, economic migrants).

As scientists have pointed out, there are also distortions in terms of the insurable earnings ceiling, resulting in an extremely high marginal tax and fee burden on the income scale of 40,000-80,000 euros, as they are subject to the highest tax rates and high tax rates. Therefore, it seems paradoxical that upper middle income income should have a higher tax burden and tax burden than even higher revenues of over € 100,000.

In the final decisions of Katrougalos law dated 4 October 2019, the unconstitutional constitutions include the compensation rates provided for the calculation of the pension of employees and the contributions of non-employees. As attorney Aspa Papathanassopoulou pointed out, the examples presented by “K, showed that the total pension period did not work in proportion to the duration of the pension and caused significant injustice. This pathogen, which constitutes an obstacle to insurance, was accepted by the Council of State in its final decisions. In particular, according to Mrs Papathanasopoulou, the Supreme Court ruled that in order to lead to a truly contributing amount of retirement that would contribute to the replenishment of income, there should be more fair, new legislation establishing substitution rates elsewhere. now he is retiring and will make a good living after leaving work.

The government has pledged to legislate new replacement rates for more than 25 or 30 years in the legislature, which is expected to come into force in Parliament by December. In order to reduce non-wage expenses by 5 percent gradually, changes are made both by deducting the contribution of self-employed from income and the level of participation of employees in their own segment.