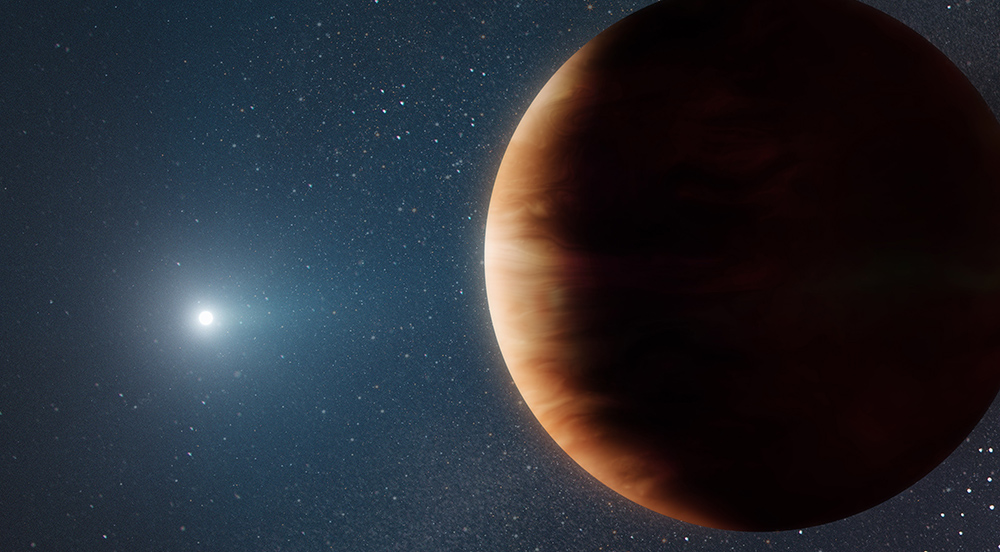 Mirror of our future: A planetary system about 6,500 light-years away reveals how our own solar system will one day end. Because in it, astronomers have discovered for the first time an pristine planet around the remnant of a burned-out star. This gas giant survived the expansion of its dying star from collapsing into a red giant and then a white dwarf, as the team explains in the expert journal “Nature.” Similar predictions are made by models of Jupiter and Saturn in our solar system.

Our sun is still in the middle of its life cycle – but it doesn’t stay that way. As our star ages, it gets brighter and hotter. As a result, the earth could lose its living world in about a billion years. In about five billion years, the sun will turn into a red giant and gradually engulf the entire inner solar system – including our earth. A little later, the sun will shed its outer shells as a planetary nebula, while its burnt core will remain a white dwarf.

Between stellar wind and tidal forces

But what are the chances of planets orbiting farther away, like Jupiter and Saturn, surviving at the end of the sun? According to the models, two opposing forces are at play: On the one hand, the red giant’s increasingly powerful solar wind is pushing the planets further outward and could therefore save them from being engulfed. On the other hand, the swollen sun creates enormous tidal forces on nearby planets that can tear it apart.

Therefore, it is unclear what fate threatens the outer gas giants. Also: So far, astronomers have observed white dwarfs with planetary remnants and even planetary core remnants. On the other hand, they never found the burnt remains of a star with a pristine planet orbiting it. “So far, no clear evidence of such a survivor has been found,” explains Joshua Blackman of the University of Tasmania and colleagues.

But that has now changed: Blackman and his team have succeeded in observing a white dwarf and a still intact planet for the first time. They tracked the duo with the help of the Keck Observatory’s powerful telescopes in Hawaii. They used them to target a star about 6,500 light-years away from us in the central direction of the Milky Way. Normally a white dwarf, or even a planet at this distance, would be too faint to be seen directly.

A cosmic coincidence came to the aid of astronomers: a foreground star crossed the distant system several times so that the gravity of the foreground star acted like a magnifying glass. Thanks to these microlensing events, the researchers were able to identify the star and planet in the near infrared and study the light spectrum more closely.

Observations revealed: The MOA-2010-BLG-477Lb system consists of a white dwarf about half the mass of the Sun orbited by a gas giant 1.4 times the mass of Jupiter. “This confirms for the first time that planets can survive the death of their star if they orbit at a large enough distance,” says Blackman. The planet around the distant white dwarf must have survived against its star transforming into a red giant and then ejected unharmed by its stellar envelopes.

It is interesting, however, that the planet’s distance from the white dwarf is smaller than the models predicted for such “survivors”: “The common assumption is that Jupiter-like planets move around such stars in orbits of five to six astronomical units away from the white dwarf.” However, the currently observed planet MOA-2010-BLG-477Lb is only 2.8 astronomical units away—about half the distance Jupiter is from the sun.

While it’s not yet clear exactly how and where the planet’s star eventually survives, astronomers are seeing clear evidence in the newly discovered duo that planets can survive the end of their star.

What does this mean for our solar system?

The discovery of MOA-2010-BLG-477Lb is also important for our own solar system: “Given the fact that this system is similar to our own, this indicates that Jupiter and Saturn will also survive the red giant phase. could be the sun, ”says the astronomer. However, the luck for the earth is still bad – not far enough from the sun.

“This system gives us an idea of ​​what our solar system would look like after the earth disappeared by the catastrophic fall of our sun,” says Jean-Philippe Beaulieu, Blackman’s colleague. The team estimates that about half of all white dwarfs in the Milky Way still have one or more large gas planets as satellites. They hope that in the future, more powerful telescopes will find more of such planetary survivors. (Nature, 2021; doi: 10.1038/p41586-021-03869-6)

So the planet MOA-2010-BLG-477Lb could have survived to the end of its star.© WM Keck Observatory/Adam Makarenko