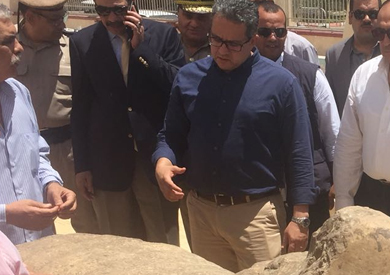 In an interview with the "Russia Today" satellite channel on Saturday, the discovery announced today in the Saqqara region is the beginning of an important archaeological exploration, with three tombs of the modern state and fragments of the graves of the old state, as well as mummies for cats and crocodiles and amulets and small sculptures. He points out the expectation that the number of stuffed cats in Saqqara will be very large.

He stated that archaeological discoveries in Egypt are 3 lines in newspapers, but everyone believes that they are interested in these influences. He has deliberately announced every trace of press in the presence of local and international media and the presence of foreign ambassadors in Egypt.

He stated that the Saqqara region was one of the most important archaeological sites in Egypt, and that it included graves from the first family until the end of the ancient Egyptian history and the Greek and Roman times, and that it contains the first stone structure (Zoser pyramid) in the world.