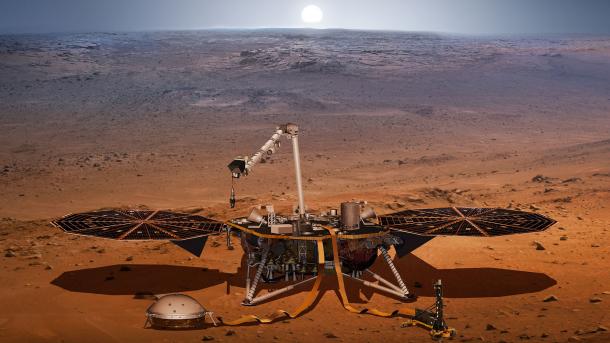 The InSight probe launched by NASA has successfully reached Mars.

NASA issued a statement to accurately understand and gather the size and composition of Mars core, Mars's inner temperature, seismic activity, and detector of this red planet structure more than 480 million kilometers after a six-month journey. 's surface was safely descended. "

In a statement, the Insight detector went down to the red star in the Mars atmosphere after 6 minutes and 45 seconds.

According to the declaration, the detector, which accelerated rapidly after entering the atmosphere, reduced the effect of collisions with the red planet while opening the parachute and the detector finally descended to the north of Mars.

The "InSight" Mars probe will place the seismograph on the ground to detect "Mars vibration". These vibrations will reveal the stratification of the underground rocks, and these data will be compared to the Earth and will reveal the causes of planet formation 4, 4 billion years ago.

The explanation goes on to say that the spacecraft will not conduct any research for the first six weeks and that scientists will observe the general state of insight during this time.

At the end of this time, the robot arm of the detector will touch the surface of Mars and will perform a vibration test on the ground approximately 40 feet from the foundation within 40 days.