Why Justin Trudeau is taking his time picking a new cabinet 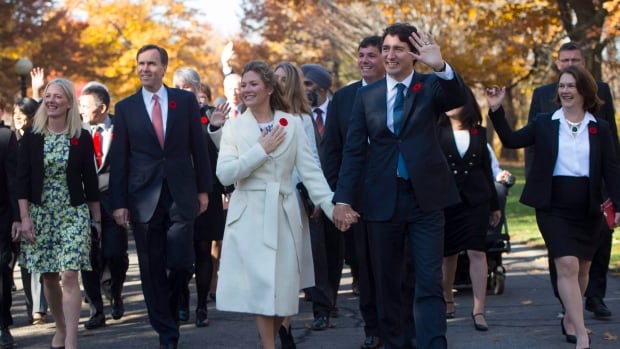 Prime Minister Justin Trudeau and his inner circle are taking more time than they did in 2015.

Trudeau's first cabinet, sworn in on Nov. 4, 2015 – less than three weeks after the election – an ambitious campaign platform. But that optimism was a front bench that was woefully short on practical political knowledge.

"Some of them had remarkably diverse backgrounds, but many of them did not have much political experience," said David Zussman, an adjunct professor in the department of public administration at the University of Victoria. He headed up Jean Chrétien's transition team when he was prime minister.

This time, the Trudeau team is stretching out the cabinet selection process. The election was Oct. 21; cabinet will not be sworn in until Nov. 20th.

In 2015, the Liberals were coming out of a surprise electoral victory and ten years out of power – and were unprepared in many ways.

"That's one of the things we saw … how difficult it is, really, to move from an untested politician to an effective minister," said Zussman.

But even before those scandals erupted, there were problems with some of Trudeau's first cabinet picks: ministers ill-suited to their portfolios, they were unable to get things done, or simply unable to communicate what they were doing to the public. Those problems led to cabinet shuffles.

MP Hunter Tootoo left the Liberal Caucus and his position as Minister of Fisheries, citing "addiction issues." He later acknowledged he'd had an inappropriate relationship with a female staffer.

In early 2017, Trudeau replaced his minister of foreign affairs, Stéphane Dion, with Chrystia Freeland. Dion was seen as an awkward fit for the portfolio, especially after the arrival of President Donald Trump.

"Cabinet-making is kind of a mix of trying to project a reality and … [a] fantasy sport. I think Justin Trudeau hoped he had the perfect fantasy team in 2015 for his cabinet, "said Tim Powers, a political strategist with Summa Strategies and Managing Director of Abacus Data.

"You do not know how people perform until they perform.

"The most experience he had in the cabinet was when he was a four-year-old and his father was prime minister," he said. "A lot of the problems of the government …" [how] "In the end, it was going to operate."

Some observers say those mismatched expectations led directly to the SNC Lavalin controversy and the departure of Jody Wilson-Raybould from both cabinet and, eventually, the Liberal caucus.

"I think the episode of Wilson-Raybould probably was a watershed," said Elly Alboim, a principal at Earnscliffe Strategy Group. Alboim was a close adviser to former prime minister Paul Martin and was involved in 2004 cabinet-making discussions.

"(This time) they will have to look at the degree to which they believe in the prospective cabinet."

In January 2019, Wilson-Raybould was moved to the veterans' ministry. Trudeau has denied the suggestion that the move was punishment for the SNC-Lavalin incident.

Alboim and Zussman both have learned and learned from the Trudeau Liberals. That was not done consistently in 2015, they said.

Inexperience is no longer a problem

But after four years in government, and after more than a handful of cabinet shuffles, inexperience should no longer be a big factor for Trudeau's people. The Liberals lost just two cabinet ministers to electoral defeat, so there is a decent pool of incumbent cabinet ministers and backbench MPs to choose from.

And Trudeau should have a better understanding of the skills and vulnerabilities of his team.

They They can see who is stronger and weaker, and they're more important to evaluate their skills. Said Michele Cadario, CEO of Vanguard Strategy. She worked for both Paul Martin and then-B.C. premier Christy Clark, helping with their transition teams.

Cadario said Trudeau's decision to make gender parity in the cabinet a priority in 2015 was a smart move, one that most observers expect to see repeated with his new cabinet.

But if inexperience is no longer a major problem for the Liberals, other problems have emerged.

The Liberals are a minority government, meaning they will work with other parties to pass legislation.

That calls for cabinet ministers who work well across party lines and who are good at governing, not simply campaigning.

It also means the House of Leader – who, along with the Whip, ensures that the government has the confidence of the House. A House Leader in a minority situation who maintains good relationships within the government.

Ralph Goodale would have fit the bill nicely – if he hadn't been defeated in his attempt at a ninth consecutive electoral win.

Which points to another challenge facing Trudeau's Liberals: they have no MPs from Saskatchewan and Alberta.

Regional representation is one of the prime minister's buildings. It often results in some MPs getting picked over others. That can lead to grumbling within caucus – which could be dangerous to a minority government.

"If you're the first actor to demote or dismiss a number of cabinet ministers, you are creating a dissident group within your caucus," said Alboim. "But if you don't promote the backbenchers, they deserve promotion, they are going to reach the conclusion that it's never going to happen and they become dissidents."

Observers say it's hard for any transition team to choose a cabinet.

Alboim suggested that, these days, such surprises are less likely.

"Because people now see how they go back and forth. So I think, I think, is diminished."

Diminished, but not eliminated – as Trudeau's own blackface scandal during the election campaign demonstrated completely.