20 years later, Inzamam says ‘Sourav wasn’t out in that game’ 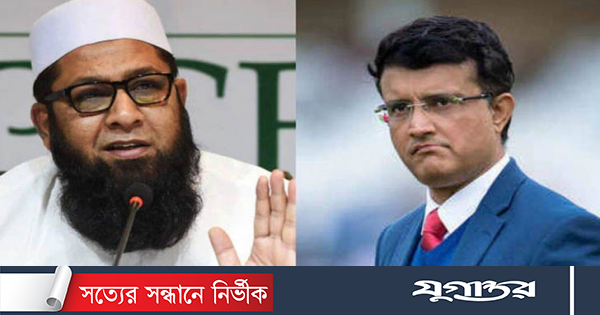 Pakistan won a dramatic victory over their hosts on their tour of India 20 years ago.

The Pakistani cricket team led by Wasim Akram lost 12 runs to India in this Test at Chennai Stadium.

In the second hit of the match, there was a whirlwind of controversy over Sourav Ganguly’s sacking. Pakistan has always claimed that Sourav is out there.

However, the former Pakistan captain Inzamam-ul-Haq, who recently joined the match, said that Surav Ganguly’s dismissal could be placed on the list of suspects.

Inzamam made these words while attending a YouTube show DRS with India’s star spinner Rabichandra Ashwin with Ash.

Speaking on this incident, Ashwin said Sourav Ganguly shot a shot at Silly Point that day. And Moin Khan demanded to capture. We don’t know if he’s been out so far! Because back then cameras and technology were not that advanced.

In response, Inzamam said, “As far as I remember, he used Azhar Mehmood instead of Wasim Akram because I was sick in the second cue.” Said. I was not on the field at the time of the incident. However, I would say that Saurabh’s capture is doubtful. Two people were initially involved in this incident. One is Azhar Mehmood and the other is Moin Khan. When Sourav hits the ball, Azhar Mehmood gets it first. After that Moin caught Khan. However, I am skeptical about the capture.

After hitting the fourth hit of the Chennai Test against Pakistan in 1999, India’s goal was 261 laps. No one could stand in front of Pak bowlers, except for Sachin Tendulkar. Team India continued to lose one rook after another from the beginning.

Sachin also took a hard hit, like a 136 run, with back pain. However, he could not win the team. In the end, India lost the match by 12 rounds.

Mixed reactions in the movie arena

El Poco M3 on the market, see price and features in detail | Learn about the features of the Poco M3 launched in the Market | technology

The start of the fire in the Kalshi suburb at midnight is unknown to everyone!

Who is on the FIFA World Player of the Year list? || Somoynews.tv – SOMOY NEWS