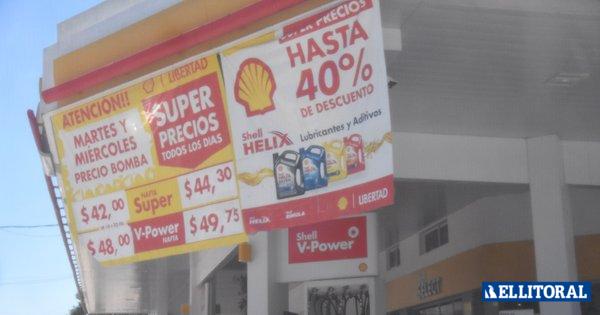 Since the launch of market prices implemented by the Nation Government a little over a year ago, oil companies have been changing their value at service stations in almost constant fashion in 2018, with an increase of about 15 and only 4 decreases. In the case of Axion and Shell companies in recent days, it has been seen that some of their products have lowered their prices and had previously made other crossings of 2018, but the discounts were much lower than the cumulative increase of around 80%.
Likewise, the state-owned YPF company holds the majority of the national hydrocarbon market and determines demand and price increases in Argentina. In Corrientes, the value of the most expensive premium naphtha on the market is close to $ 50 (reaching $ 49.99).
In recent days, the service stations of Axion Energy and Shell flags have seen a decrease of between 3% and 4% in the prices of diesel products. For example, Axion 's outlets lowered their diesel and more refined diesel values ​​by an average of 3.2% over the weekend, but this week it did the same in Shell diesel hydrocarbons. 4% estimated.
Because the two lubricants reduce their values ​​in a market where different withdrawals of the demand are always recorded, rather than the initial reductions in the price of service stations as a competitiveness strategy. For example, in mid-April, Shell implemented discounts ranging from 3% to 4% for all products; and Axion Energy reduced the costs of hydrocarbons by 1% in the last days of September.
However, the decrease in the values ​​applied at service stations ranging from 4% to 7% per year depending on the petrol station is small compared to the cumulative increases recorded to those in progress. year and 80% approach to this approach. The oil companies in this 11-month period applied a 15-percent increase from the monthly update.
In August and September, a maximum of three updates per month were recorded in fuel prices.
He stated that the price increase of the service stations of the service stations, each price increase recorded in the sales mouths, attracted the demand because it created a withdrawal in hydrocarbon consumption and affected the profitability for the suppliers of the whole country. .